« S'more Reality Computing Fun! | Main | Re-Making History: The Future of Our Past » 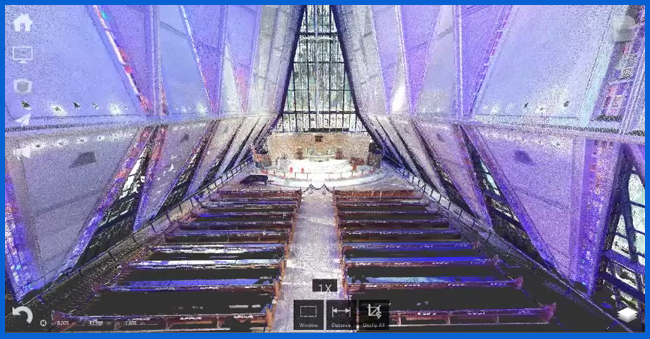 A team from Autodesk spent a week in June using Reality Computing to scan the interior and exterior of the U.S. Air Force Academy (USAFA) Cadet Chapel, gathering site data to create a virtual model of the facility.

Located in Colorado Springs, Colorado, the Cadet Chapel is an all-faiths house of worship designed to meet the spiritual needs of cadets. The distinctive structure was completed in 1963 and features 17 spires resembling upended fighter jets. Its principal designer and architect was Walter Netsch of SOM. The USAFA reports that more than a half million people visit the chapel every year and it is the most popular man-made tourist attraction in the state.

The main goal of this effort is to help USAFA inspect the chapel for structural damage. In addition, USAFA can use the captured reality data (and derivative building model) for a variety of tasks such as online virtual tours of the chapel, project visualizations for future renovations or special event planning, and energy cost analyses.

Autodesk used ground-based and aerial laser scanners and digital photography to collect data without disrupting activities at the site. Over the course of the week, the team captured 129 scans of the chapel’s interior and exterior with a FARO Focus3D X 330 laser scanner, as well as 1232 photographs of the chapel’s exterior using a DJI Phantom 2 unmanned aerial vehicle and a GoPro HERO3+ Black Edition camera (click here to see the aerial footage).

With on-site data collection complete, Autodesk will process the data to create a variety of photorealistic, georeferenced 3D models of the chapel and example analyses for USAFA. Click here for a USAFA newsletter article about the project.

Posted by The Reality Computing Team at 09:02 AM | Permalink

Interesting article and example building! About the aerial footage captured with DJI phantom, there is a youtube video of the flight - How are you planning on using the video footage? Or did you also capture still images simultaneously? Will there be video file support in ReCap 360 perhaps?