As-builts... Problematic as they are, we need them. But do we really need as-built models? Is there a better way to represent as-built conditions? Some firms are starting to put Reality Computing to work as an option.

In his presentation at SPAR International 2014, Magnus Rönnäng of Volvo Car Group described how using 3D CAD for the virtual modeling of their plants has been futile. “It has been much too time consuming to create the model, and by the time the model is ready, the plant itself has been altered many times,” explains Rönnäng. “The point cloud is our digital plant.” He advises us to scan what we have and model what is new. Good advice and a good fit for Reality Computing.

Today we start a new series of posts about how Reality Computing combined with geometric modeling is proving to be a better way to document as-built conditions.  We'll explore the importance of as-builts, the drawbacks of using design solutions to create as-built models from scratch, and the use of heterogeneous data sets of captured reality data and modeled objects for new or critical existing elements to document as-built conditions. We’ll also profile two companies using Reality Computing for as-builts: Stiles Corporation and McCarthy Building Companies, Inc. 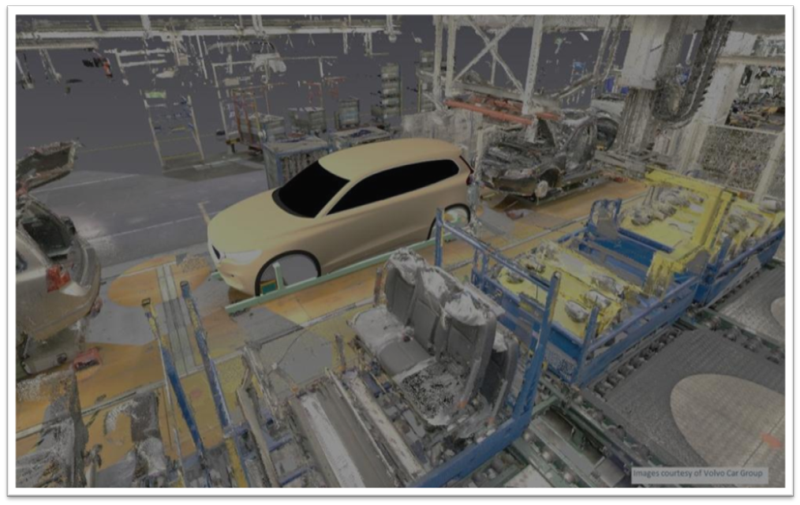 Volvo Cars no longer tries to maintain as-built geometrical models of the manual assembly cells for their plants because the models are expensive to develop, immediately out of date, and lose the rich detail captured with the reality data. Instead, they scan existing assembly cells and the resulting point cloud is their digital plant.
Image courtesy of Volvo Car Group

The importance of as-builts

As the name implies, as-builts are supposed to reflect changes made in the specifications and design drawings during the construction process. As such, as-built drawings (and more recently digitally modeled representations of the as-built project) theoretically depict the exact dimensions, locations, and geometry of elements in a project.

These representations of existing conditions have a variety of uses: for renovation or reconfiguration projects, for facility management, operations and maintenance (O&M), for land development, and so on. For example, as-builts of an automotive manufacturing plant can be used to virtually simulate and verify production processes. As-builts of a high-rise can be used to perform analyses for energy efficiency retrofits. As-builts of a highway interchange and the surrounding terrain can be used for infrastructure reconfiguration.

So what is the myth surrounding as-builts? Experience shows us that almost all "as-builts" have accuracy issues and therefore—contrary to its name—do not reflect the project as it was built. The industry has wrestled for years with the difficulty of achieving an as-built record of the building and who might be relied on to deliver what level of information. [Note: please see some references at the end of this paper for a sampling of some relevant articles and online discussions on this topic.]

Sometimes the record of what was constructed is nothing more than original design drawings, marked up with red ink by the contractor. These "record drawings" are an approximation of what was built, but remain only diagrammatic. Sometimes, as-built drawings are created from scratch using measurements taken with variety of tools: from tape measures and single shot lasers, to more advanced techniques involving photogrammetry, total stations, or 3D laser scanning. Or they can be a mixture of these approaches—archived marked-up drawings supplemented by field measurements.

In addition, existing conditions are not always perfect. What if a building (for example) has settled—the floor is a little slanted and the walls are a little tilted? And what about constructions tolerances, such as a steel column that accumulates deviations throughout the milling, fabrication, and erection processes. No one expects it to be perfectly straight…except when it comes to modeling it using design software. This figure from the American Institute of Steel Construction (AISC) illustrates how individual tolerances of steel members can accumulate and lead to unexpected misalignments in the field. As-built conditions such as this can be precisely documented using Reality Computing.
Image courtesy of AISC.

3D design software likes to model ‘perfect’ elements–straight columns, level floors, plumb walls, and so forth. Trying to record the physical world with modeled geometry smooths out all the rich variety and detail of the physical world, which can be very important in some situations. The steel framing variances that will lead to a poor fit-up with a curtain wall. The slight sag of an existing overpass that will affect the upgrade of the highway underneath it. The "approximately" installed ventilation ducts that will interfere with the installation of the sprinkler system. In situations like these, the as-built model appears to be correct but leads to false confidence. Errors come to light during the actual project, resulting in change orders and large costs at the end of the project.

And what about construction that is already in place but changes late in the construction process, or equipment or systems that are updated post-occupancy? Hopefully those changes are picked up in the as-builts, but often they are not—leading to issues during maintenance or renovations.

Reality Computing integrates the digital and physical worlds, bringing together many products and technologies to digitally capture existing conditions, use that information to create digital simulations and designs, and deliver the result back in our physical world.

Reality Computing is also a cost-effective and efficient method to represent as-built conditions. Heterogeneous data sets of native reality data (typically in the form of point clouds resulting from 3D laser scanning), metadata for the objects captured in the point cloud, and (as needed) modeled objects for new or critical existing elements can be used collectively to document as-built conditions.

The advantages to this as-built approach are compelling. The point cloud data is accurate and detailed, reflecting as-built conditions in ways traditional measurements, standard drawings, and derivative 3D models cannot. For O&M or facilities management, incremental scanning processes keeps as-built information up to date, whereas the measurement and modeling effort to keep modeled as-builts up-to-date is error prone, time-consuming, and costly.

As BIM processes and virtual coordination become routine, the use of laser scanning to capture as-built conditions is becoming more prevalent. For example, a 2014 SmartMarket Report by McGraw Hill Construction reports that one of the top ways that global contractors use BIM during the construction phase of a project is to use laser scanning to validate compliance of constructed work with design models. Construction companies are using Reality Computing to support new services that document as-built conditions and provide highly accurate, intelligent as-built models and commissioning deliverables.

In our next post, we’ll explore how Stiles Corporation used as-builts created with Reality Computing to support HVAC upgrades for a Fort Lauderdale performing arts center.

Posted by The Reality Computing Team at 06:00 AM | Permalink