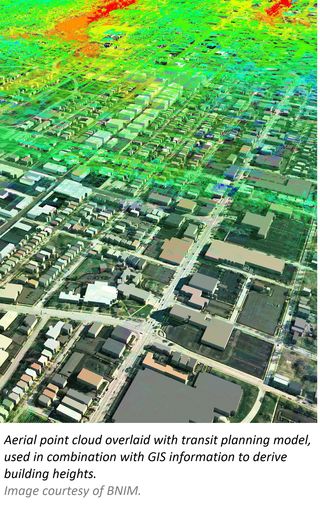 Kansas City, Missouri is in the midst of constructing a new two-mile streetcar running through the city’s central business district. The line is envisioned as the trunk of a wider system of streetcar routes in the city and Reality Computing is playing an important role in the transit planning process for that expansion.

For several years, the city has engaged the public, neighborhood groups, local businesses, and other interested organizations in shaping the proposed expansion. To support this effort, the city and its project team—led by Kansas City architectural firm BNIM—is creating a 3D project model for early planning and visualization. The team is using Reality Computing and Autodesk software to collect and combine data sources of existing conditions within the expansion area, and merge that information with preliminary streetcar design data. Existing sources include point clouds from aerial scanning (LiDAR), utility and GIS data, city planning data for permitting, land values, economic impact, and so on.

Once the existing conditions and design data are combined into an aggregated model, the team will use that model to create a baseline for analysis, enabling the city to track and trend growth in the project area. The team will also be using model-based visualizations to show the projected build out for the corridor. As development proposals become available, 3D models of proposed buildings will be added to the project model to create renderings and animations that will help city officials and the public understand the impact of new development.

Click here (page 22) for more information on the project.

Posted by The Reality Computing Team at 03:03 PM | Permalink