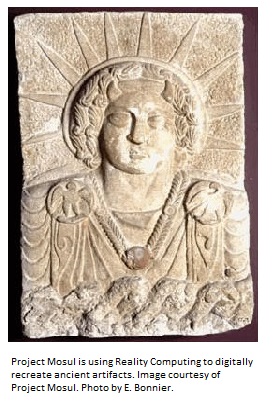 The Mosul Museum in Mosul, Iraq was the country’s second largest museum. Although the museum was looted during the Iraq War, it was scheduled to reopen in 2014 and contained many priceless articfacts from the Assyrian era and from the ancient city of Hatra.

But before it could reopen, ISIS extremists took over the city. This past winter, propaganda videos showed the extremists using sledgehammers and power tools to destroy and deface some of the museum’s artifacts.

In an effort to at least digitally restore these and other lost artifacts, a group of researches created a volunteer initiative called Project Mosul. The researchers are part of the Initial Training Network for Digital Cultural Heritage—a European Union-funded initiative aimed at preserving cultural heritage using digital technology.

Reality Computing is at the heart of this effort. Visitors to the Project Mosul website can upload photographs or videos of the artifacts, and the project volunteers use photogrammetry to create 3D digital models of the artifacts from these images. The digital restoration becomes more complete and of a higher quality as more images are processed. The models will then be displayed in an online museum accessible to the public. The digital restorations are expanding to include other destroyed or damaged artifacts in the Middle East and beyond.

As the Project Mosul website explains, “While these 3D objects can never replace the artefacts that have been destroyed, they can serve as a starting point to keep the memory of these objects and their meaning alive. The 3D objects may initially serve in helping identify stolen items and aid researchers working on the destroyed items. Virtual reconstruction is not an end in itself, however, but the start of a reengagement with the meaning of these objects. It is hoped that the virtual representations will give an additional tool to the communities that wish to think about, learn about, and work on the preservation and dissemination of these important elements of a national, regional and global history, and to return a sense of agency to those left helpless in the face of the destruction of their heritage.”

For more information, check out the Project Mosul website or these articles:

Posted by The Reality Computing Team at 12:23 PM | Permalink